November 19 ~ Held by the Three Fates

Drawing 321 ~ of the Thread of Life that according to Greek Mythology is…
spun….
measured
and cut.
by three sister deities, the Three Fates from Greek Mythology. ( see below)

A woman who studied Greek Mythology in university shared a table with me at the OnRoute highway stop on my way back home after my father died.  I was still very sad and was getting my bearings. She consoled me with this myth and they have been on my mind ever since.  Finally,  the Thread of Life made its way onto paper 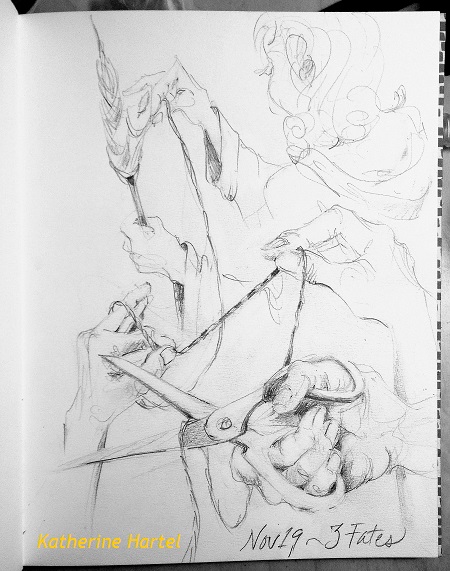 In Greek Mythology, The Moirai or Fates were three sister deities, incarnations of destiny and life. Their names were Clotho, the one who spins the thread of life; Lachesis, she who draws the lots and determines how long one lives, by measuring the thread of life; and Atropos, the inevitable, she who chose how someone dies by cutting the thread of life with her shears. They were often described as being ugly and old women, stern and severe. Three days after a child was born, it was thought that the Moirai would visit the house to determine the child’s fate and life.
It seems that the Moirai controlled the fates of both mortals and gods alike. It may be that Zeus was the only one not bound by them, as an epithet that was used for him was Moiragetes (he who commands the fate). Other sources suggest, though, that he was also bound by the Moirai. It is also uncertain who their parents were; in some myths, they were daughters of Zeus and the Titan goddess Themis, the goddess of divine order. In others, they were daughters of Ananke, the personification of necessity.
« November 18 ~ Nasal Pillows
November 20 ~ Flashback Friday; Fall Roots 1989 »